eT-Kernel is an upgraded version of open source RTOS T-Kernel, extended with unique eSOL technology for embedded systems. Taking advantage of the specific "T-License" of T-Kernel, it can be commercialized without making the software open-source. Source code is provided to eSOL customers however to allow more efficient development and integration.

Open source T-Kernel has been extended

As an RTOS vendor, eSOL has put great effort and know-how into enhancing T-Kernel 2.0 (distributed by Tron Forum) with T-Kernel/Standard Extension source code as a basis. When compared to open source T-Kernel, eT-Kernel offers the following additional features:

Compatibility with T-Kernel is retained

eT-Kernel retains backward-compatibility with Tron Forum’s T-Kernel 2.0. eSOL is certified by Tron Forum to distribute a modified version of their product, so that you can use eT-Kernel with peace of mind.

Three profiles are available so that you can select what is best for your system’s scale and usage requirements. One model is small, resembling μITRON with excellent real-time capability; another includes a process model with the same memory protection function as Linux; the third model, a superset of the previous one, is compliant with POSIX specifications. 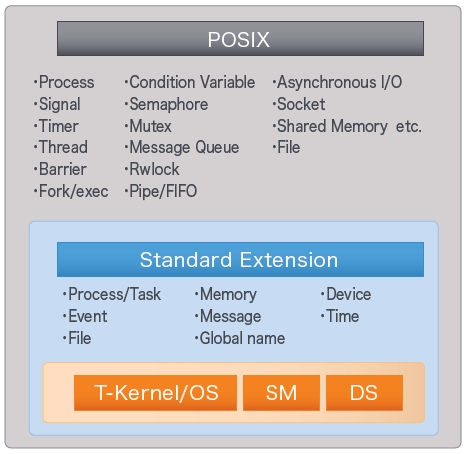 A multi-core compatible version called eT-Kernel MCE (*Multi-Core Edition) is available. Even when using the eT-Kernel MCE, an ideal profile can be selected from the option above. A unique "Blended Scheduling" technology allows mixing SMP-type programs and AMP-type programs in a single system. Also, a system protection function helps to ensure complex multi-core system quality and reliability.

Software assets can be re-used with three profiles

Since core kernels are the same for eT-Kernel POSIX, eT-Kernel Extended, and eT-Kernel Compact, developments such as device drivers and middleware can be re-used as kernel applications. When the user has a product line and wants to change the profile to match a product series, development can run effectively while re-using software.

eBinder offers an efficient development for all three profiles

eBinder is available as a development environment for T-Kernel based embedded software development. eBinder can be used for development with eT-Kernel Compact, eT-Kernel Extended, and eT-Kernel POSIX. eT-Kernel MCE is also supported. There is no need to learn how to use new development tools, etc. each time you change your OS or profile, allowing you to move forward with development more efficiently.

A Logical File System (LFS) is provided, providing ANSI/POSIX file system APIs. It is fully integrated with the provided thread-safe C library. It can be called from anywhere, including processes and kernel applications including system programs. FAT file system is integrated as a standard file system that can be used via POSIX interface.
Extensive POSIX support is available, including pthread, mutex and related API in addition to file system APIs.

eT-Kernel has been successfully deployed in a wide range of diverse fields. It is also being used for numerous products that are currently under development.
Adoption Examples

eT-Kernel provides the source code for each of its three profiles.
Comprehensive documentations ia provided as well, including a User Guide, Board Support Guide, Getting Started document, etc.

T-Kernel’s software architecture features a flexible, layer-type scalable structure, allowing you to change it accordingly to match the system you’re developing. Various setups are available to promote re-use of software. A simple explanation of each program feature that makes up the architecture is provided here.

eT-Kernel follows the device driver specifications prescribed for driver interfaces and drivers. When transitioning programs that use a driver to a new hardware environment, driver interface standardization allows you to re-use applications such as middleware and libraries without changing interface parts.

A subsystem is a setup used for expanding T-Kernel functions. As shown in the diagram, subsystems operate in T-Kernel, with T-Kernel/OS offering a subsystem management function. T-Kernel can also be statically linked to or statically loaded. For example, middleware such as the file system and the TCP/IP protocol stack can be implemented as subsystems. User-created unique libraries, etc. can also be added as subsystems. By implementing middleware or user-created libraries as subsystems, a shared interface can be provided for upper-level applications. Also, since subsystems do not depend on a CPU or board thanks to the layer-type T-Kernel architecture, subsystems simply need to be recompiled to operate when changing hardware, with no repair necessary.