eT-Kernel MCE is an RTOS that allows SMP-type and AMP-type software structures to co-exist within a single OS. 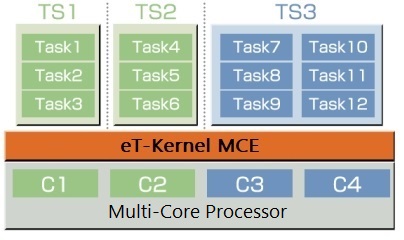 Since an AMP-type program has one CPU core dedicated to it, just as when operating with a single-core processor, the program will execute in a predictable order, guaranteeing real-time behavior for each process within the program.

An SMP-type program can raise the total average throughput to its highest level. This is ideal for best-effort type programs that do not stress importance on real-time capability for individual processing.


Reuse of software assets for a Single-core processor is easy

Even Single-core processor software assets that are not recognized by a multi-core processor can be easily re-used through eT-Kernel MCE’s scheduling method.

By using eBinder, functions and tools can be used efficiently to easily solve the complex issues that are unique to multi-core processor use, while keeping the - same development model as when using a single processor.

This feature contributes to efficient software development for multi-core processors. In addition to debugging individual programs running with each CPU core, this feature also makes it possible to transparently perform tasks such as cooperative operation between programs and full system analysis.

Developers can assign a single CPU core to operate the program. Because of this, the program can run on a determined core just as with an AMP-type system.

Merits of SPM
Software assets meant for a single-core processor that are not recognized by multi-core processors can be easily re-used.

With this mode, the OS can be used to select a CPU core to operate a program. Program tasks are dynamically allocated to each available core and carried out according to priority level. 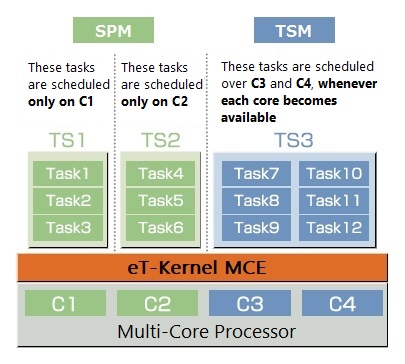 This mode allows developers to assign a single CPU core to run a program, from multiple TSM cores that run TSM programs. Because of this, the program will only run with the determined core, but other TSM programs and SRL-on-TSM programs can also run on that core.

Merits of SPM on TSM

This mode serializes and runs an assigned task set (normally all tasks belonging to a process). Serialization means that these tasks will not run simultaneously in multiple cores. SPM and SPM on TSM are the same in this respect, but the difference is that cores for running tasks are not fixed, instead spanning over multiple TSM cores. Serialization targets a task set belonging to a certain process, and is not performed for tasks belonging to a different process. Because of this, running multiple processes in this mode will carry out the same serialization as that of a single processor for task groups within the processes. Also, load balancing will be performed in process units for other processes, providing the SMP merit of automatic load sharing.

Merits of SRL on TSM

Conceptual Image of SPM on TSM and SRL on TSM 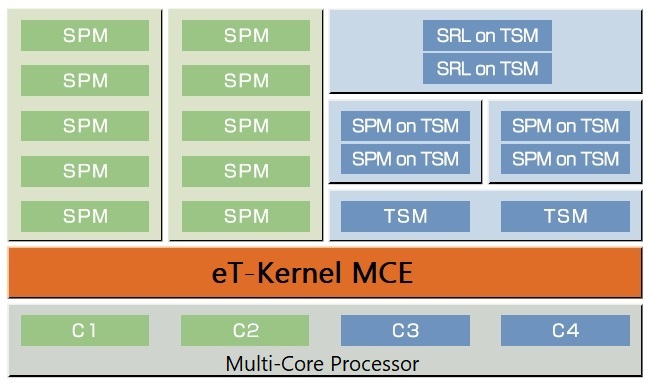 This system structure example applies when using a multi-core processor with four CPU cores. When using SPM on TSM or SRL on TSM, the pattern will increase even more. 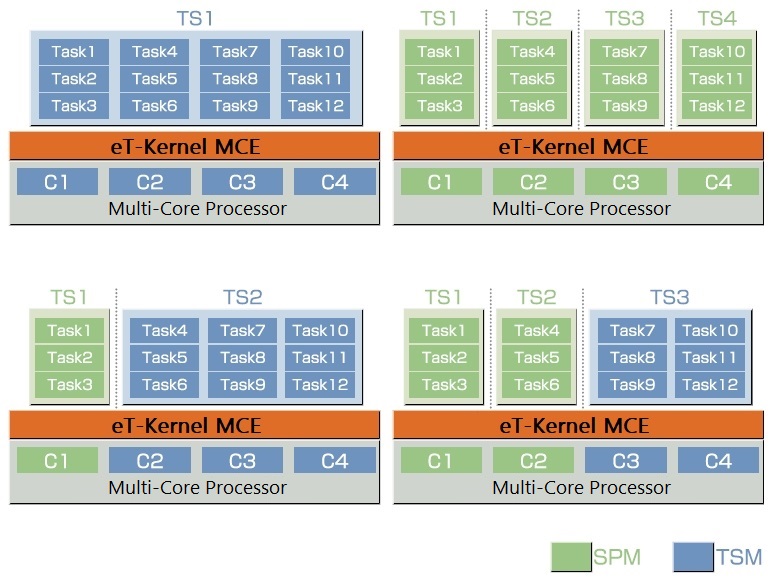