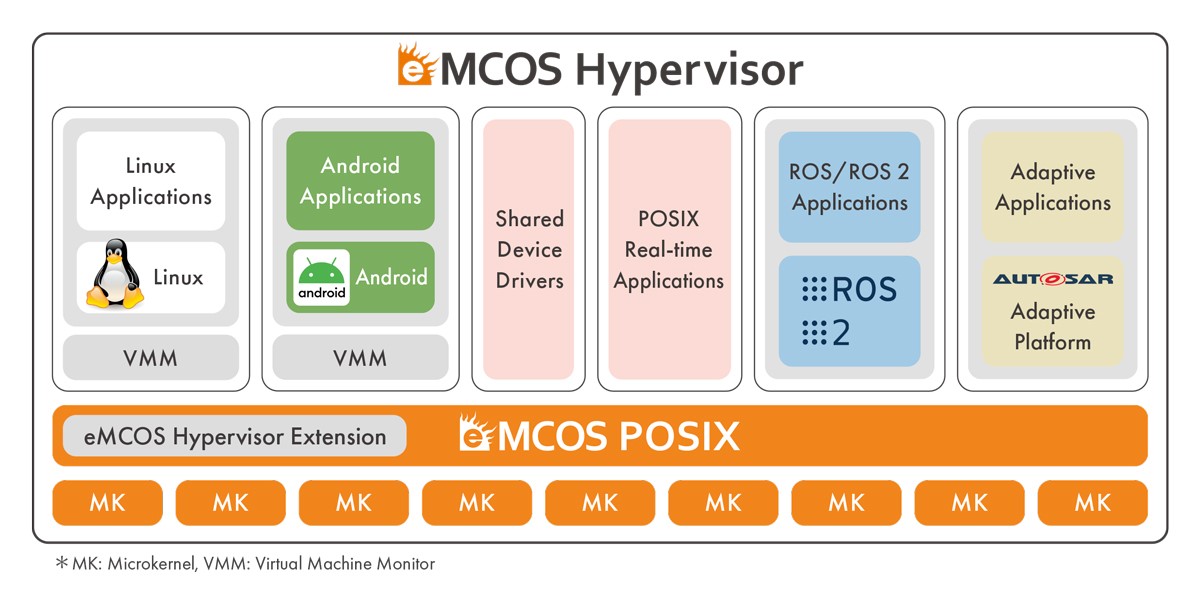 ◇
In terms of architecture, the addition of virtualization to the eMCOS RTOS brings even greater flexibility in mixed-criticality system configuration, making it possible to incorporate general-purpose operating systems like Linux or Android without compromising real-time capabilities and safety.
Among many notable advantages, users can leverage eMCOS’s advanced scheduling capabilities. As eMCOS Hypervisor is implemented by incorporating a mechanism for virtualization into eMCOS POSIX, users can enjoy scheduling features such as load-balancing and time separation, on the same hardware platform as a guest OS.
A further major benefit is the ease of customization relating to the boot sequence of a general-purpose OS. As guest operating systems are started as eMCOS POSIX processes, the boot sequence can be implemented simply as a process start, and is easily customized as sequential start-up and multi-core parallel start-up. The deployment of multiple guest operating systems is performed in a coordinated, optionally load-balanced manner, without impacting the determinism of real-time or safety functions.
Also appealing to users will be the easy porting of drivers. Linux standard Virtio drivers are supported, making it easy to port Linux guests. In addition, drivers that are tightly coupled to the SoC can be ported with ease because the Virtual Machine Monitor (VMM) can filter or passthrough hardware accesses.
Another important point is the robustness of eMCOS Hypervisor against malfunctions and malicious software. The system is designed to minimize and optimize the virtualization mechanism in the more privileged hypervisor and kernel space and perform most processing in the VMM placed in the user space. As a result, abnormalities in the guest OS and virtual machine do not cause catastrophic failures that lead to a system-wide crash.
◇
eMCOS Hypervisor is ideal in applications that demand a high level of real-time capabilities, reliability, and safety, such as those found in the automotive, industrial, and medical industries. However, recent times have seen the requirements for systems increase with regard to scale and complexity. Examples include domain-controlled autonomous vehicles and connected cars, and support for smart factory functionality and the autonomous control of industrial robots. Capabilities such as integration and interoperation with other systems are becoming ever-more important, even in applications which have traditionally placed a high priority on real-time functionality.
"The application of eMCOS Hypervisor opens up a whole new dimension of scalability for eMCOS,” states Rolland Dudemaine, Vice President Engineering at eSOL Europe. “In short, it provides users with more scope for integrating real-time functions within a system, while existing Linux- or Android-based platforms continue being used on eMCOS Hypervisor with minimal changes. Linux and Android guest operating systems not only deliver the required POSIX-compliant API for simple existing code reuse, but support a high number of graphics display solutions and open communication protocols. This combination introduces better flexibility for implementing more advanced, open and diverse mixed-criticality systems."
[eMCOS Hypervisor] https://www.esol.com/embedded/emcos-hypervisor.html
- END -


■For Reference
About eSOL Co.,Ltd.
Founded in 1975 and listed on the Tokyo Stock Exchange (TSE: 4420), eSOL is a leading global company in the fields of embedded systems and Industrial IoT that seeks to create a safer and better connected society using its innovative computer technologies. eSOL's high-performance and scalable software platform products and first-class professional services, centered around its unique and patented real-time operating system technology, are used worldwide in most embedded application fields. This includes automotive systems, which conform to the most stringent quality standards, as well as industrial equipment, satellites, medical and digital consumer electronics. In addition to the research and development of its own leading-edge products, and joint research with major manufacturers and universities, eSOL is actively engaged in AUTOSAR and Multi/Many-Core technology standardization activities.
▽For more information about eSOL
* eSOL, eSOL Co.,Ltd, ESOL, eMCOS, EMCOS are registered trademarks or trademarks of eSOL Co., Ltd in Japan and other countries.
* Other company or product names are trademarks or registered trademarks of their respective companies.