PrCONNECT Pro is a TCP/IP protocol stack for embedded systems. It provides the BSD Socket Interface to enable effective utilization of software assets and human resources for POSIX software such as Linux. TCP/IP Stack provides a large number of protocols*, including protocols for security and routing. It delivers substantial functionality and performance not only on multimedia or portable digital devices, but also on higher-level, advanced network devices.
* Some protocols are available as options.

Best-class performance in the industry

Supports an IP multicast sending and receiving function, which enables the same data to be sent to multiple specified destinations at the same time. This is effective for distributing large-sized media data such as video or audio.

PrCONNECT Pro has a function selection switch for adjusting the overall code size. If the DHCP client, DNS client, IP multicast, or AutoIP function is not needed, this function selection switch can be used to specify the unused function during system configuration so that the function module is not embedded. The code is adjusted to the minimum required size to prevent wasteful memory consumption.

PrCONNECT Pro componentizes source code dependent on the target system, such as the operating system, CPU, or NIC (Network Interface Card), as environment-dependent parts. In addition, TCP/IP Stack is coded in C language. As a result, PrCONNECT Pro has excellent portability, making it easy to support various platforms. PrCONNECT Pro is configured to run on eT-Kernel as standard. On eT-Kernel, it runs on various profiles such as eT-Kernel MCE (Multi-Core Edition).

The functions needed for use in the application can be selected.  Dual stack for IPv4/IPv6 is also available.

* These optional protocols are released as required. The product configuration may be changed. Please contact us for details such as the release date. 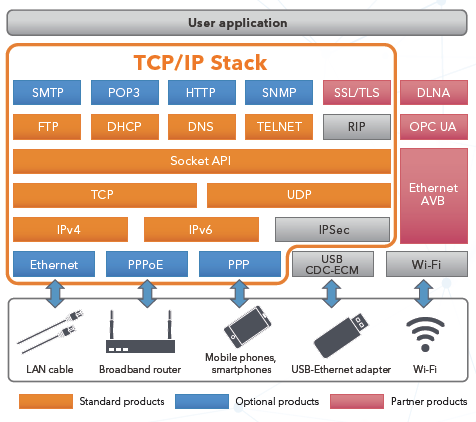 Successful operation has been demonstrated on the following operating systems.