IEEE SHIM Working Group Chaired by eSOL CTO Masaki Gondo
Tokyo, Japan. February 6, 2020 - eSOL, a leading developer of real-time embedded software solutions, today announced that SHIM has been formalized as IEEE Std 2804-2019, the first such standard to be formulated by the IEEE Computer Society/Design Automation/Software-Hardware Interface for Multi-many-core Working Group (IEEE C/DA/SHIM WG), which was established in February of last year within the Institute of Electrical and Electronics Engineers (IEEE). The Multi-many-core Working Group’s role was to work on the standardization of hardware architecture descriptions from the standpoint of software design. Masaki Gondo, eSOL's CTO and Technology Headquarters GM, played a central role in formulating the standard, serving as working group chair and making continuous contributions that resulted in the standard being issued less than one year after the working group got underway, an extraordinarily short time for an IEEE standard.
◇
The IEEE C/DA/SHIM WG was established in February 2019 as a working group for the standardization of hardware architecture descriptions from the standpoint of software design within the Design Automation Standards Committee of the IEEE Computer Society, one of the 39 separate societies within the IEEE. This working group is in charge of defining descriptive standards of architecture from the standpoint of software design for Software-Hardware Interface for Multi-many core (SHIM), as well as providing XML schemas to abstract the key hardware properties that are critical to enabling multi-many-core tools. The XML interface will assist in reducing costs for supporting new multi-many-core hardware. This is expected to spur development of new and innovative multi-many-core tools for building an ecosystem of multi-many-core technology. 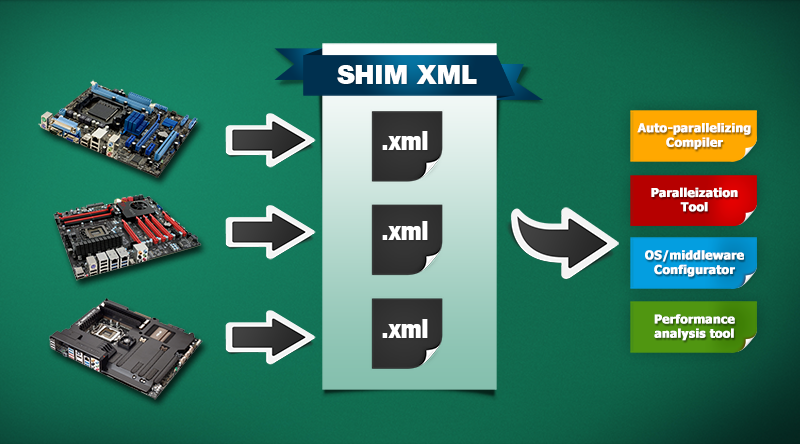 Existing tools that already use IEEE Std 2804 include the eMBP model-based parallelizer being developed by eSOL in partnership with Nagoya University and SLX from Silexica GmbH for which eSOL Trinity acts as an agent. Compliance with IEEE Std 2804 enables these tools to provide prompt support for new multi-many-core chips from different vendors.
Since 2013, eSOL representatives have been serving as chairperson of the SHIM Working Group for the Multicore Association (MCA) in the United States, which is an international industry group for multi-many-core technology established in 2005, and as the vice-chairperson of the Embedded Multicore Consortium in Japan, which was itself established in 2014. Having published the new IEEE 2804 international standard, the IEEE C/DA/SHIM WG is expected to facilitate further work on technical development and the preparation of specifications to encourage worldwide adoption of the SHIM specification.
eSOL is also involved in the R&D Project on OS-Integrated Platform for Scalable Edge HPC by conducting R&D on the development of innovative AI edge computing technology for the Project for Innovative AI Chips and Next-Generation Computing Technology Development, which was launched in 2018 by the New Energy and Industrial Technology Development Organization (NEDO). By promoting wider utilization of IEEE Std 2804, eSOL is working to resolve technical issues in more sophisticated embedded systems for a wide range of fields. The company is also taking greater leadership in the advancement of next-generation embedded computing through R&D.

◇
eSOL is a recognized leader in the research and development of embedded real-time OS (RTOS) for multi-many-core processors. In 2012, the company was successful in developing the Many-Core real-time OS (MCOS), the world's first commercial RTOS for embedded many-core processors which has been available in the market since 2013 under the eMCOS® product name. eMCOS is an RTOS that uses a distributed microkernel architecture that is completely different from other conventional single-core and multi-core RTOS architectures; it incorporates eSOL's proprietary scheduling algorithm "Semi-priority-based Scheduling" (Japanese Patent No. 5734941 and 5945617). Also, eSOL's eT-Kernel™ Multi-Core Edition (MCE), an RTOS for multi-core processors that was released in 2006, has a demonstrated track record of successful use in a wide range of highly-advanced embedded systems, including networked home appliances and car navigation. The eT-Kernel MCE includes eSOL's proprietary Blended Scheduling technology, which enables both SMP and AMP subsystems to coexist within the same system. It also provides a system protection feature that protects the memory and CPU time for easily boosting the efficiency of system integration, real-time capability, and reliability in multi-core system development.
“As embedded systems grow more intelligent, tools will be essential for assisting in the development of software using advanced multi-many-core systems. The SHIM standard will prove invaluable for a wide range of tools, including those for hardware modeling and system configuration as well as boosting the performance of parallelization tools. We are confident that the development and adoption of the SHIM standard will continue to accelerate thanks to the extensive IEEE–SA network. eSOL will leverage its long history in developing specialized technology and building its knowledge base on OSes and tools for providing leadership for standardization in multi-many-core technology and contributing to the further development and use of multi-many-core technology”, says Masaki Gondo, CTO and Technology Headquarters GM at eSOL Co.,Ltd.
◇
■For Reference

Masaki Gondo is CTO at eSOL, the company that provides POSIX/AUTOSAR/TRON RTOS, various embedded software development tools and engineering services. He has more than 20 years of experience in the field of OS architecture and related technologies for use in a wide range of embedded system applications including automotive, industrial and electronic appliances. In the last decade he has worked on a scalable heterogenous-multi-manycore OS, application parallelization tools, domain-knowledge-based machine learned driver models, Scrum development and functional safety.Masaki also acts as an architect of AUTOSAR Adaptive Platform specification, IEEE C/DA/SHIM WG Chair, Multicore Association SHIM Working Group chair, Vice-chair of Embedded Multicore Consortium, Chief Architect for AUBASS, and visiting research fellow at Advanced Multicore Processor Research Institute at Waseda University, amongst other roles.

About eMCOS
eSOL’s flagship eMCOS is a scalable real-time operating system (RTOS), being the first such product to provide support that extends from single-core to many-core CPUs. The use of a distributed microkernel architecture unlike that of previous RTOSs enables eMCOS to provide scalability both in the number of cores supported, from single-core all the way up to many-core processors with hundreds of cores, and in terms of functionality, from microcontroller systems based on OSEK and AUTOSAR to high-end POSIX and process-model-based systems. The RTOS is also ideal for the heterogenous computing required for IoT applications that involve a combination of different processor types, such as heterogenous and homogenous multi-core and many-core processors, microcontrollers, GPUs, and FPGAs. eMCOS also has a proprietary semi-priority-based scheduling algorithm (Japanese patent numbers 5734941 and 5945617). Along with high performance and scalability, these technologies also ensure the real-time performance that is essential in mission-critical embedded systems.
▽For more information about the eMCOS
About eT-Kernel MCE
eT-Kernel Multi-Core Edition (MCE) is an RTOS for embedded systems using a multi-core processor. Featuring eSOL's proprietary Blended Scheduling, the eT-Kernel MCE enables the coexistence of both symmetrical (SMP) and asymmetrical (AMP) multi-core processing in a single system. Four scheduling modes are available based on Single Processor Mode (SPM) and True SMP Mode (TSM). By using a program to select the appropriate mode, it is possible to enjoy the advantages offered by both SMP-type and AMP-type programs within a single system. SMP-type programs offer high throughput, while AMP-type programs feature remarkable real-time capability and software asset re-usability.
▽For more information about the eT-Kernel MCE

About eSOL Co.,Ltd.
Founded in 1975 and listed on the Tokyo Stock Exchange, eSOL is a leading global company in the fields of embedded systems and Industrial IoT that seeks to create a safer and better connected society using its innovative computer technologies. eSOL’s high-performance and scalable software platform products and first-class professional services, centered around its unique and patented real-time operating system technology, are used worldwide in most embedded application fields. This includes automotive systems, which conform to the most stringent quality standards, as well as industrial equipment, satellites, medical and digital consumer electronics. In addition to the research and development of its own leading-edge products, and joint research with major manufacturers and universities, eSOL is actively engaged in AUTOSAR and Multi/Many-Core technology standardization activities.
▽For more information about eSOL
* eSOL, eSOL Co.,Ltd, ESOL, eMCOS, EMCOS, eT-Kernel, BLENDED SCHEDULING are registered trademarks or trademarks of eSOL Co., Ltd in Japan and other countries.
* Other company or product names are trademarks or registered trademarks of their respective companies.