Autonomous Driving Platform with Autoware and ROS on eMCOS
Contact us

Autonomous Driving platform with Autoware and ROS on eMCOS 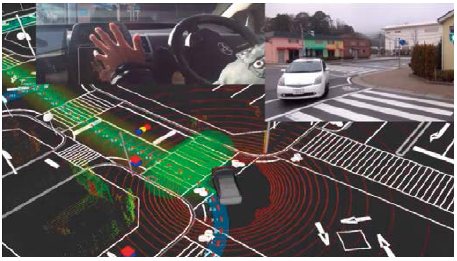 This is a demonstration of autonomous driving, which is enabled by Autoware running on eSOL's eMCOS RTOS and Kalray's MPPA manycore processor. 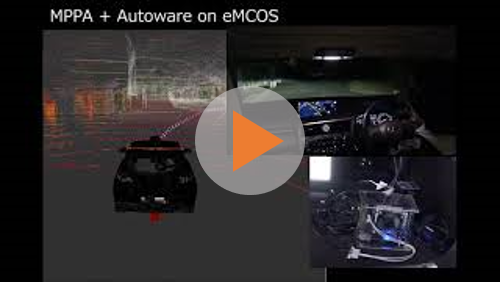 Autoware is an open source software for autonomous driving systems based on Linux and ROS (Robot Operating System). As part of the joint achievements of Nagoya University, Nagasaki University and AIST (National Institute for Advanced Industrial Science and Technology), it is made available free of charge for research and development of autonomous driving. Autoware enables autonomous driving along a route dictated by a car navigation system using environmental sensors such as laser radar, cameras, and global navigation satellite systems (GNSS) while vehicle positions and surrounding objects are identified. 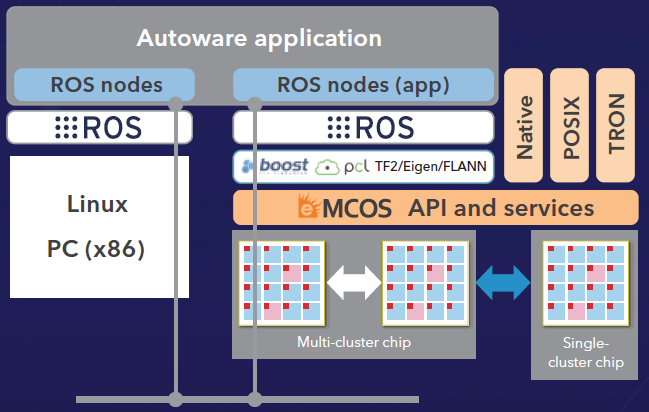 As a Premium Member of the Autoware Foundation, an international alliance dedicated to establishing industry standards for autonomous driving technology, eSOL takes on a role in projects aimed at the practical use of Autoware, including participation in the formulation of future technology directions and strategy. From the very beginning, eSOL was involved in the project to develop the Autoware open source software for autonomous driving systems and participated in tests and demonstrations of actual vehicles based on multi-core processors running its eMCOS ultra-scalable real-time operating system (RTOS).

Although Autoware started out as autonomous driving software developed to run on Linux and ROS, the adoption of eSOL’s eMCOS scalable multicore RTOS in place of Linux ensures the high-level real-time performance and reliability necessary for widespread deployment.
eMCOS is the world's first commercial RTOS that supports scalability from MCUs up to multi/many-core heterogeneous processors as well as multi-chip configurations.eMCOS is based on a multikernel architecture (aka distributed microkernel), which is very different from conventional single microkernel operating system designs. This unique architecture is combined with a patented scheduling technology called “semi-priority base scheduling”, which provides hard real-time and load balanced soft real-time capabilities. Along with its high performance and scalability, this is essential to critical embedded systems.