eMCOS is the world’s first commercially available, ultra-scalable Real-Time Operating System using the distributed micro-kernel approach. eMCOS’s new OS architecture - unlike any existing RTOS architecture - enables scalability to support not only increasing core counts, but also heterogeneous hardware configurations, include different architectures such as on-chip flash microcontrollers, GPUs, and FPGAs. The platform is not only already ported to several hardware architectures, but can also be easily ported to new platforms with its highly-portable source code and design.

A Distributed Microkernel Architecture is used as a new architecture for enabling support from single-core controllers to heterogeneous multi-core and multi-chip processor configurations. 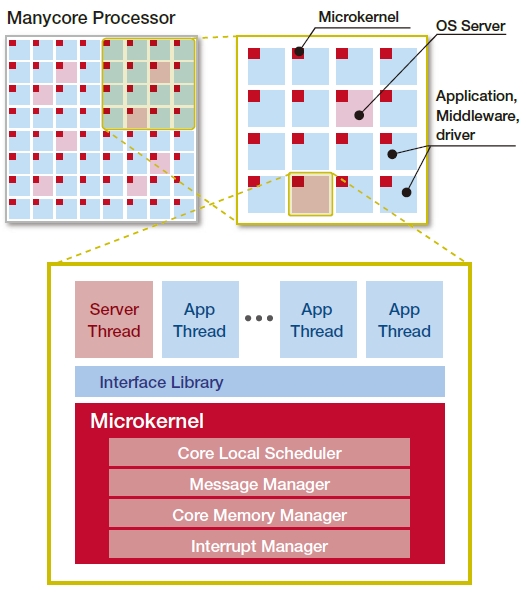 An independent microkernel is running in each core and provides basic services such as inter-core message passing, core local scheduling, thread management and interrupt management.The microkernel has an extremely compact design and consists of only minimal functions.

On the other hand, more advanced OS services, such as file services and network services as well as other middleware and device drivers are located in the same core or distributed on multiple cores as thread servers independent from the microkernel, operating under a client-server model. In the same way, applications are also
distributed and executed in a set of cores as threads. To ensure that all cores are used efficiently, these thread groups are scheduled and executed using the microkernel based on the thread priority and the operating status of each core.

Typically, the core executing the thread is determined by eMCOS scheduling including automatic
load balancing, but when required, a core affinity function can be used to fix the core running the function.
Threads are all connected by microkernel message-passing. However, when viewed from the application, the OS services and middleware APIs can be used as normal C/C++ language functions. Thanks to the integration of the message-passing functionality, user APIs do not need to be aware of this underlying mechanism. Also, to execute highly-parallelized applications such as coding and image processing, thread-pool and fast messaging libraries are provided to enable low-overhead communication and synchronization with parallel thread execution. 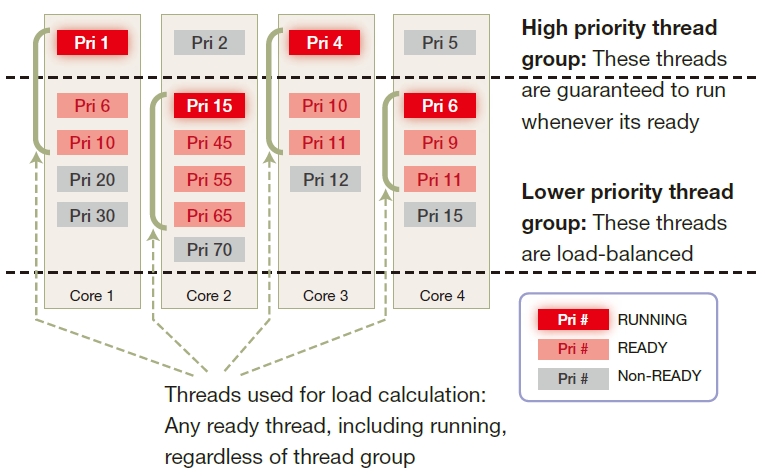 Micro kernel operates independently on each core, reducing resource contention and providing high throughput.
This is made possible as the thread control blocks (TCBs) for each core are separated from one another, resulting thread switching on their own cores to be interference-free from other cores. 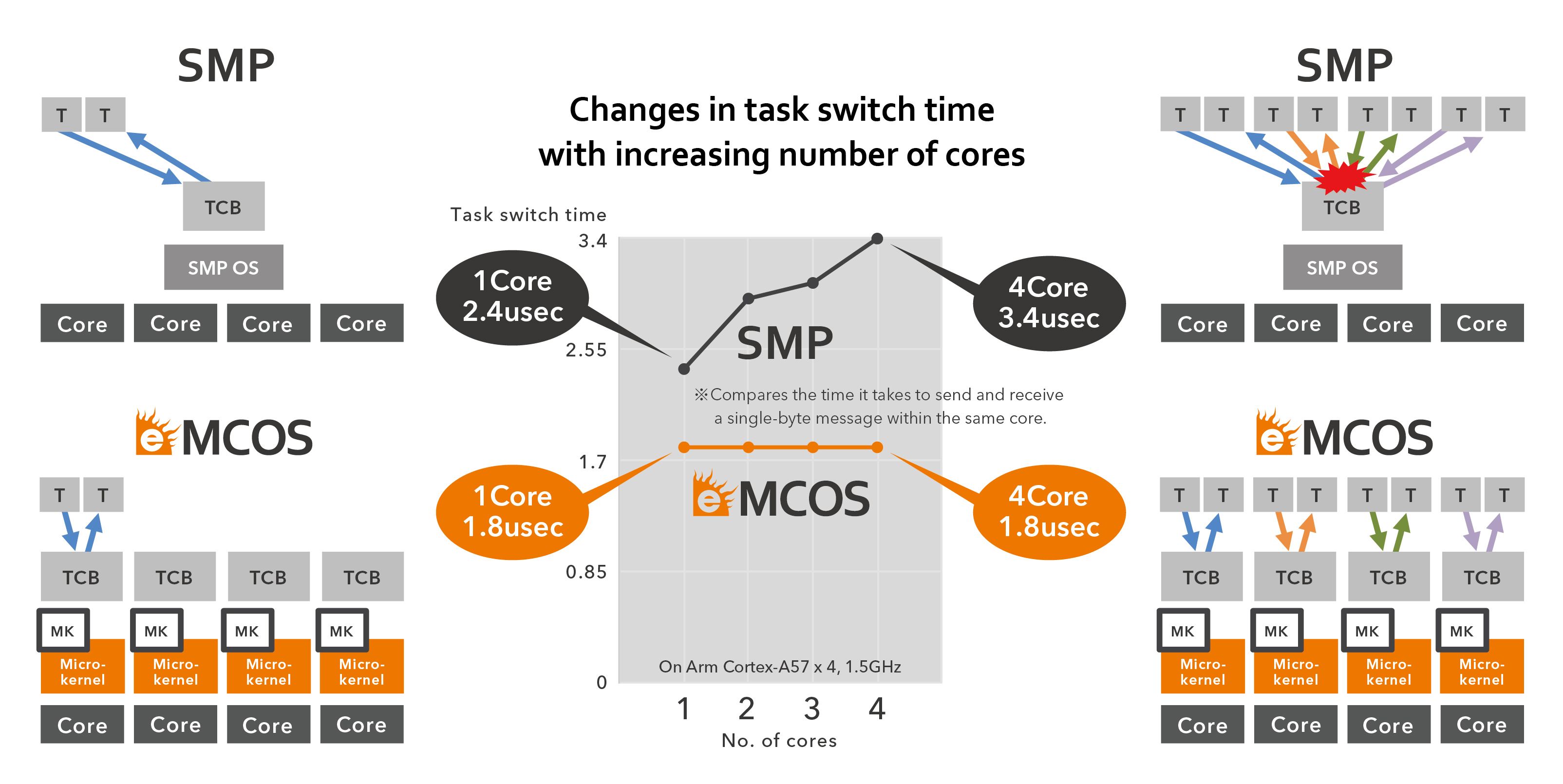 As applications operate independently on each core, it provides a complete isolation between general and safety-critical applications. Moreover, applications are tightly coupled with one other through kernel-level lightweight messages.

Applications can be scheduled in partition basis. While a partition is being executed, it will not be affected by another partitions.
As the behavior within the partitions are preserved, inconsistencies due to timing discrepancies caused by integrating separately developed applications into a single system are less likely to occur, thus making system integration much easier.
The time which each application can run in a partition is confined to an allocated set time (budget). This prevents abnormal application behaviors from impacting other applications
and operating system. 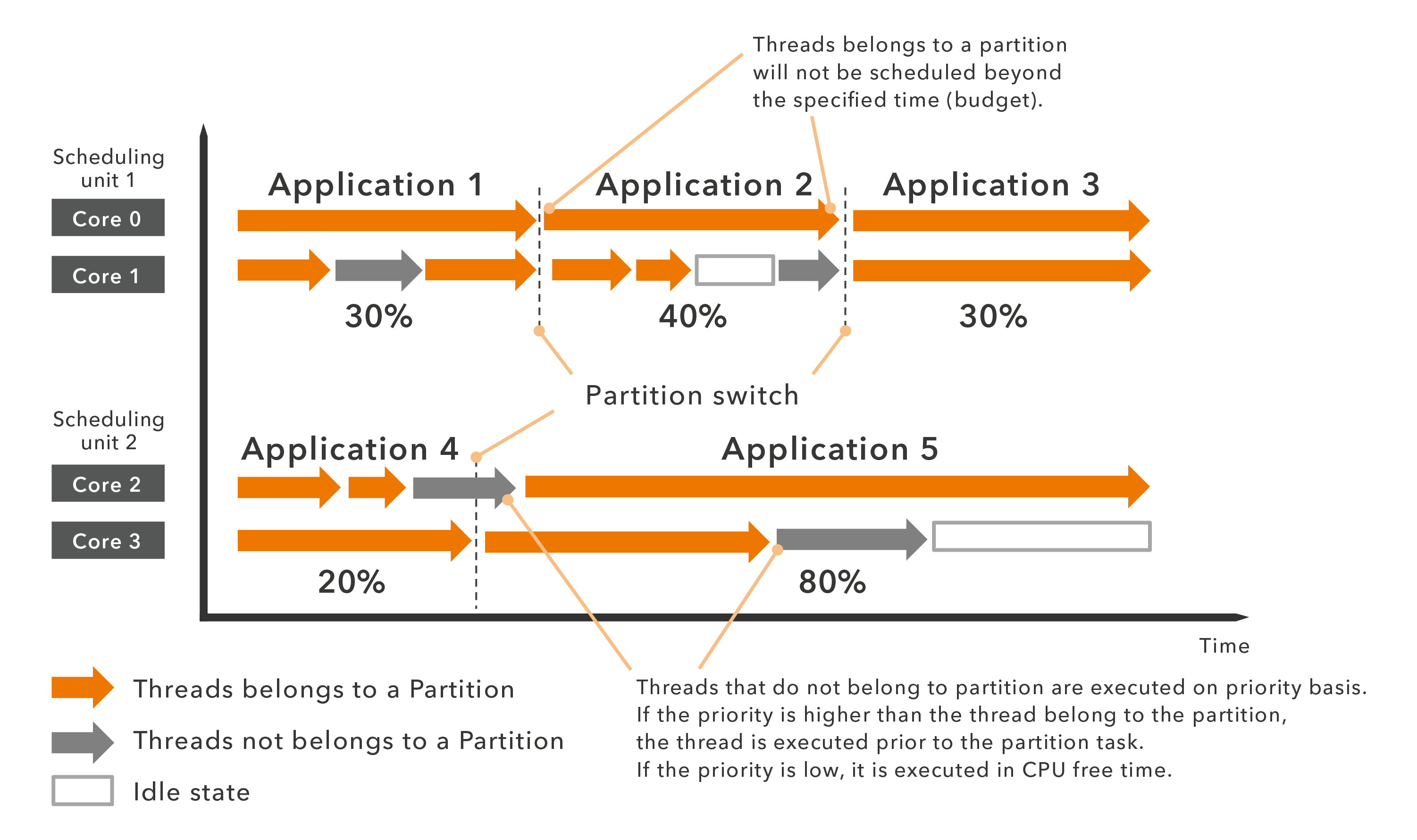 Support from Single-core to Heterogeneous Multi/Many-core 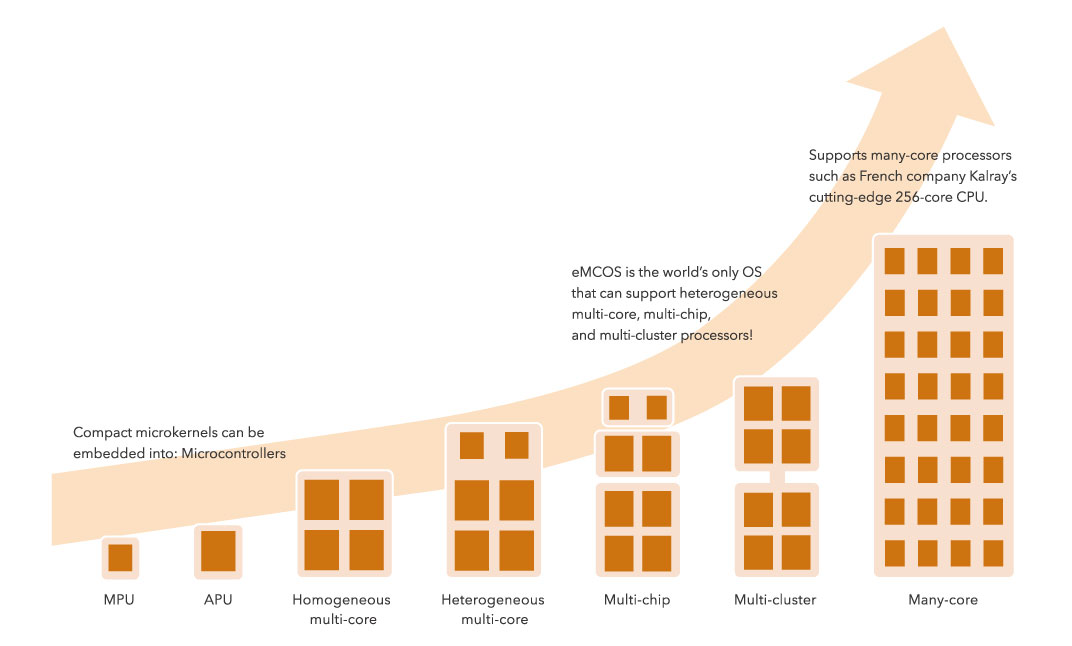 eMCOS POSIX is a profile compliant with POSIX 1003.13 PSE 53, making multi-process programming possible. POSIX specifications
at API settings are supported while keeping the scalability and real-time performance capabilities of eMCOS unchanged.
Various libraries that use POSIX as an OS, such as ROS and AUTOSAR Adaptive Platform, can be easily added to the system.
Back to top of the page 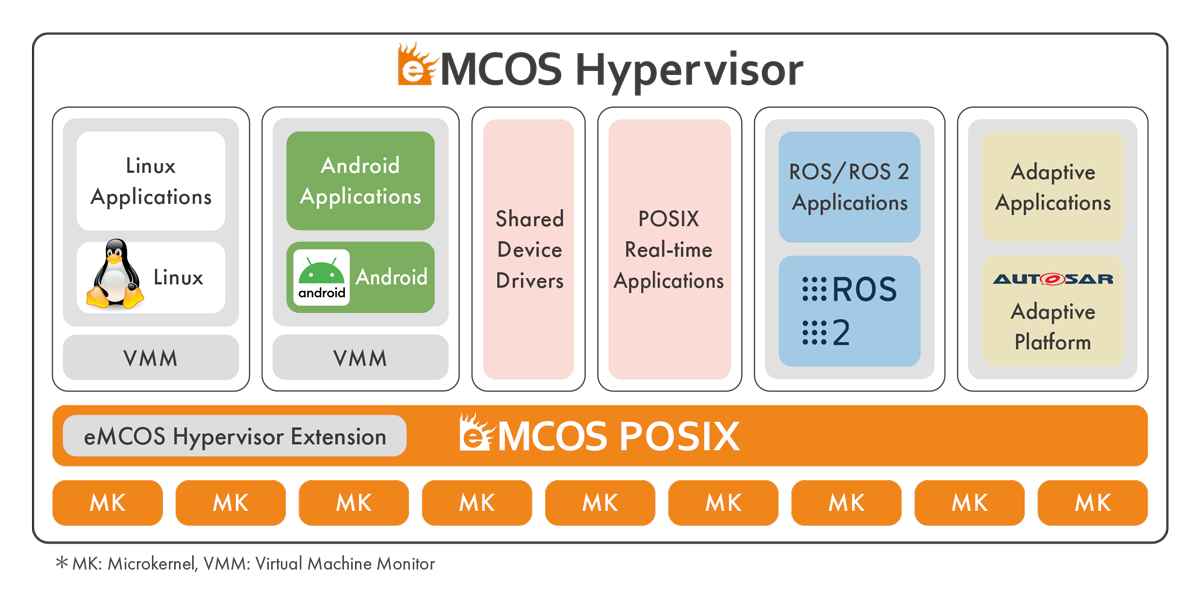 eMCOS Hypervisor is implemented as an extension to the POSIX-compatible eMCOS POSIX RTOS. This means that real-time and safety-critical applications for eMCOS POSIX can be deployed next to Linux and Android guest OSes on the same hardware platform. This opens up a new dimension of scalability for eMCOS, providing users with greater scope for integrating related functions within a system while continuing to use their existing Linux- or Android-based platforms on eMCOS Hypervisor with minimal changes. Linux and Android guest-OSes provide the necessary POSIX-compliant API for an easy existing code reuse, as well as they support a large number of graphics display solutions and open communication protocols. The combination brings greater flexibility for implementing more advanced, open and diverse "mixed-criticality" systems.
Back to top of the page


Enables speeds of up to 30% faster compared to Linux

Speed improvement of 30% and more has been obtained at the application level compared to Linux on selected benchmarks.


Back to top of the page

In the same way as multi-core operating systems like the eT-Kernel MCE, the eMCOS application programming model is independent of the underlying CPU instruction set.The APIs can use the regular C or C++ languages, with additional language interpreters available on demand. Support for POSIX and AUTOSAR APIs means that AUTOSAR and Linux software assets can also be reused.

For application development, you can take advantage of eBinder, an eclipse-based integrated development environment that supports plug-in. Our Professional Services provide one stop services for product support, customization, and porting. In addition, runtime software and development tools such as the Board Support Package (BSP) includes eMCOS, various middleware, and device drivers will be provided as part of the eMCOS SDK to support efficient development of high-performance applications.