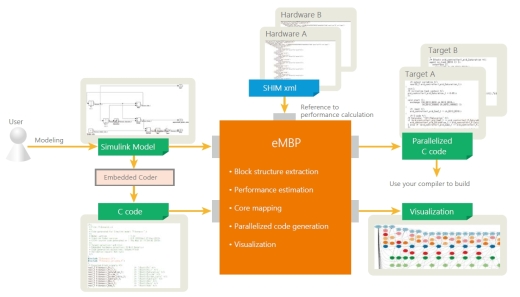 Tokyo, Japan. April 11, 2017 - eSOL, a leading developer of real-time embedded software solutions, today announced the release of its eMBP model-based parallelizer that supports the development of software for multi- and many-core hardware. Using models designed on the Simulink® model design tool from MathWorks® as its input, eMBP automatically generates parallel code with higher reliability and execution efficiency that accurately reflects design intentions. Because it allows to utilize models with a higher level of abstraction than the C source code used by existing parallelization tools, it helps reduce both development time and cost. eMBP will be sold by eSOL TRINITY, a subsidiary of eSOL.

Model-based development (MBD) is being introduced more and more, especially by system developers who need to satisfy demanding safety requirements, such as those who work with automotive ECUs or in industries like aerospace, telecommunications, or electronics. eMBP facilitates the efficient development of multi- and many-core systems with high reliability and performance by solving the problems of software parallelization, one of the major challenges facing multi- and many-core system development, while also taking advantage of the benefits of MBD for improving product quality and development efficiency through its cooperation with Simulink, a widely used model design tool.

eMBP arranges Simulink models into parallel blocks that are then used as a basis for the parallelization of C source code. Whereas the parallelization of control algorithms is difficult to achieve through the analysis of C source code alone, eMBP makes it easy to achieve in a way that accurately reflects the designer’s intentions. The tool is designed to be used for a wide variety of multi- and many-core processors and target configurations. It currently supports the RH850 automotive microcontroller from Renesas Electronics and the eMCOS real-time operating system (RTOS) from eSOL, with the scope of support to be further expanded in the future.

1) Block structure extraction: This identifies opportunities for parallel execution at the block level.
2) Performance estimation: This estimates execution performance based on the architecture and performance data of the multi- or many-core processor to be implemented. These performance estimations use the XML-based Software-Hardware Interface for Multi-Many Core (SHIM) format.
3) Core mapping: This puts blocks together into groups that are able to be executed in parallel and assigns them to each core.
4) Parallelized code generation: This automatically generates parallelized C source code.
5) Visualization: A tool is available that provides an intuitive GUI display of the relationships between the blocks that have been grouped for execution in each core.

The SHIM used for performance estimation is a description standard published by The Multicore Association to abstract the hardware properties of various multi- and many-core processors. eSOL has been actively involved in promoting the wider adoption of multi- and many-core technology, including chairing the SHIM working group that formulated the SHIM standard, and serving as deputy chair and director of the Embedded Multicore Consortium, the activities of which include supporting the adoption and use of SHIM in Japan.

eMBP was developed through joint research between eSOL and the Edahiro Laboratory of Nagoya University, with assistance from the Strategic Innovation Program for Energy Conservation of the New Energy and Industrial Technology Development Organization (NEDO).

eSOL intends to continue providing strong support for multi- and many-core software development, not only through the newly released eMBP but also by providing comprehensive products and services including scalable eMCOS RTOS, its dedicated eBinder development tools and professional services. eMCOS provides support across a range of configurations, including different architectures and numbers of cores, from single core to heterogeneous multi- and many-core processors as well as minimally spec’d microcomputers, GPUs, FPGAs, and multi-chip configurations. It also intends to continue acquiring the latest technologies and knowledge through such activities as participating in the work of standardization bodies in Japan and overseas, including The Multicore Association and the Embedded Multicore Consortium.

A demonstration of eMBP working with a Renesas Electronics processor-in-the-loop simulation (PILS) will be showcased at the eSOL stand at Renesas DevCon Japan 2017 (The Prince Park Tower Tokyo, Tuesday April 11, 2017). Using eMBP Adaptor for Renesas PILS (an optional extra for eMBP), the demonstration will use PILS to perform performance estimation and measure the actual performance after core mapping. eMBP and eMBP Adaptor for Renesas PILS will also be available for purchase from Renesas Electronics agents.

“Embedded systems, especially automotive systems, are adopting ever more sophisticated functions and achieving higher levels of performance. At eSOL, we have been standing behind developers who use multi-core or many-core processors since the latter half of the 2000s,” said Masaki Gondo, CTO and General Manager of Technology Headquarters at eSOL. “One of the major challenges facing such developers is how to make development more efficient by getting software designed for single-core to run correctly on multi- or many-core processors. Along with providing powerful support for this problem of software parallelization, a major feature of the newly released eMBP is how it takes advantage of model-based development. eSOL will continue to support the development of multi- and many-core software by providing the RTOS used at run-time and development support tools that include eMBP together with professional services.”


Founded in 1975, eSOL is a leading developer of real-time embedded software solutions that seeks to create a rich IoT society using its innovative computer technologies. eSOL’s software platform products and professional services, centered around its real-time operating system technology, are used worldwide in every field, starting with automotive systems, which conform to the most stringent quality standards, and including industrial equipment, satellites, and digital consumer electronics. In addition to the research and development of its own leading-edge products, and joint research with major manufacturers and universities, eSOL is actively engaged in AUTOSAR and Multi-Many-Core technology standardization activities.
For more information, please visit https://www.esol.com


eSOL TRINITY (TRINITY) is a premier solutions provider for the design and development of embedded software. TRINITY’s comprehensive solution consists of consulting and professional services, tools, and fostering of engineering experts. With its rich experience in the automotive market and its wide range of expertise including model-based development (MBD), functional safety and static analysis, TRINITY contributes to improvement of internal software quality and reduction of development costs. TRINITY was established in 2015 as a wholly owned subsidiary of eSOL Co., Ltd., the leading provider of real-time embedded software solutions.
For more information about eSOL TRINITY, please see http://www.esol-trinity.co.jp/ (Japanese only).

The PDF form file for the journalist is here.